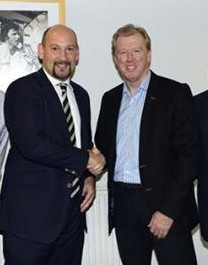 Former Rams player and coach has returned to the club, having just signed a two and a half year deal for Head Coach for the Rams.

The 52 year-old former England manager will take his position on Wednesday but will watch from the stands Derby County's game against Ipswich Town tomorrow evening.

All at Derby County Mad wish Steve the best of luck in his new position...