Chris Wood scored the only goal of the game as Leeds cemented their place in the Sky Bet Championship play-off places with a 1-0 victory over fellow promotion hopefuls Derby.

Leeds were full value for their fifth straight home win as they moved up to third in the table, eight points clear of seventh-placed Derby. 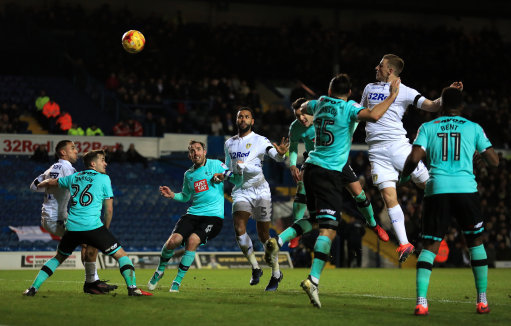 United dominated the first half in front of new joint-owner Andrea Radrizzani but looked set to rue Kyle Bartley's glaring miss until Wood headed in his 17th goal of the season from the home side's 11th corner just before the break.

The hosts' makeshift defence was put under more pressure in the second period but Derby rarely threatened and their hopes were ended by Bradley Johnson's late red card on his return to Elland Road.

Leeds have played much of the season with only three centre-halves on their books and only one of those defenders, Bartley, was available to face Derby with Pontus Jansson suspended and Liam Cooper injured in the FA Cup victory at Cambridge.

Luke Ayling, Bartley's centre-back partner when Arsenal won the FA Youth Cup in 2009, shifted across to the heart of Leeds' defence and Lewie Coyle came in at right-back.

With Gaetano Berardi continuing at left-back in the absence of Charlie Taylor, it meant Leeds started Friday's clash with three right-backs, but the focus was at the other end as the hosts won a flurry of corners in the early stages.

Derby survived the onslaught and then applied some pressure themselves, Johnson firing over after Tom Ince had a shot saved by the legs of Rob Green.

That proved to be only brief respite for the Rams and Leeds finally got the goal their first-half performance merited as Wood hung in the air from Hernandez's corner to glance a header beyond the Carson.

Derby thought they had an equaliser when Darren Bent charged down Green's clearance, only for the referee to rule it out for handball

Doukara scuffed a shot wide as Leeds came again but United were indebted to a brave piece of defending from Coyle to block Vydra's shot after a quick raid by the Rams.

Berardi volleyed just over as the breakneck speed continued, but Derby were no closer to finding an equaliser and soon called on debutant David Nugent

Leeds poured forward in search of a second with Vieira seeing a strike beaten away by Carson, before Hernandez and Roofe both shot wide.

Derby tried to mount a late surge without threatening Green's goal and there was no way back after Johnson was sent off for a second bookable offence two minutes from time, Leeds comfortably holding on to record their fifth successive clean sheet at Elland Road.