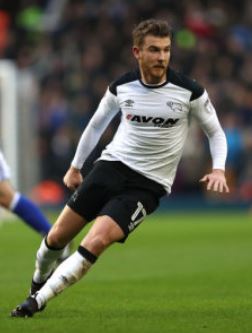 The Rams have been dealt a serious blow to their attacking options with news that Sam Winnall has been ruled out for the rest of the season with a crutiate knee injury.

The injury was suffered against Brentford lat week and will mean the Sheffield Wednesday loanee will play no further part this season for the Rams.

Winnall has not been part of the starting line-ups for Derby County but has played a significant role comeing on as a late substitute on several occasions.

Luckily the Rams are blessed with back up in the striking area of the field but the injury is seen as a blow to the promotion prospects of the Rams.

Winnall hs scored four goals in ten outings with the Rams since his loan move in August 2017. He was part of a loan swap deal which saw Jacob Butterfield go in the other direction.