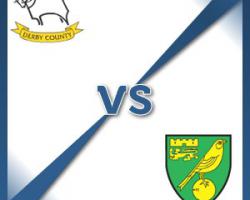 Derby V Norwich - view commentary, squad, and statistics of the game live.Buxton banned for RamsDerby defender Jake Buxton will miss the visit of Norwich through suspension.Buxton was sent off against Chelsea in the Capital One Cup defeat to the Premier League leaders in midweek and he will begin a two-match ban

Ryan Shotton will replace Buxton in the team on Saturday and partner Rams captain Richard Keogh in central defence.Jamie Ward will remain on the sidelines for Steve McClaren's men, with the Northern Ireland international forward nursing a new thigh problem

However, another thigh complaint then kept him out of the games against Middlesbrough and Chelsea.McClaren hopes to have Ward available again for the Boxing Day fixture at Birmingham.Vadis Odjidja-Ofoe, who is out for up to 10 days with a minor knee complaint, is Norwich's only injury worry.The midfielder has not played since a 0-0 draw at Sheffield Wednesday in October.Ryan Bennett returned after being out since August with an ankle injury in the under-21s' 1-1 draw with Liverpool on Tuesday but this game may come too soon for him.Wes Hoolahan, Nathan Redmond and Lewis Grabban could all start after making impacts from the bench in the 5-0 win over Huddersfield last week