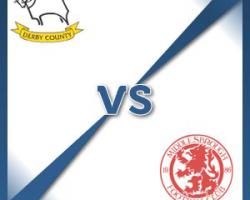 Derby V Middlesbrough - view commentary, squad, and statistics of the game live.Thorne set for Rams returnGeorge Thorne could return to the Derby squad for the crunch clash with fellow Championship title contenders Middlesbrough at the iPro Stadium.Thorne has missed the last four games, which have brought two defeats and two draws for the Rams, with a thigh problem and it is hoped he will pass a late fitness test.Fellow defensive midfielders Omar Mascarell and John Eustace definitely remain out, though

Mascarell suffered a foot injury in training on Friday and will miss between four and six weeks while Eustace is still recovering from knee surgery.Hamstring injuries mean that top scorer Chris Martin and fellow striker Darren Bent will also remain unavailable against Boro

However, there is a chance Bent might be ready for the trip to Wolves on Friday night.Middlesbrough defender Dani Ayala is doubtful due to a hamstring injury sustained in his return to action in Saturday's win against Ipswich.Ayala, who had missed the previous seven games because of a thigh problem, could be replaced by Jonathan Woodgate

Fellow defender Damia Abella is not yet ready for action following a long-term knee injury.Full-back Ryan Fredericks will definitely not feature after missing out on Saturday due to a hamstring injury sustained in the recent defeat at Nottingham Forest.Muzzy Carayol, who has not featured for the first team for a year, is struggling to force his way back into the squad following his long-term knee injury