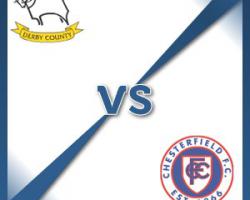 Derby V Chesterfield - view commentary, squad, and statistics of the game live.Rams boss to ring changesDerby head coach Steve McClaren is expected to make some changes for the visit of League One neighbours Chesterfield in the FA Cup.The Rams swapped nine players against non-league Southport in the previous round

The changes may not be so wholesale this time, but the likes of goalkeeper Kelle Roos, defenders Lee Naylor and Ryan Shotton, midfielders Jeff Hendrick, Simon Dawkins and Ivan Calero and strikers Mason Bennett and Darren Bent are options for McClaren.New signings Stephen Warnock and Raul Albentosa could also come into contention

Left-back Warnock missed the league defeat to Nottingham Forest last weekend with an ankle injury while Derby remain hopeful of receiving international clearance for Spanish centre-half Albentosa.Will Hughes came off at Forest with a knee injury but it looks like he will be involved on Saturday

However, fellow midfielder Craig Bryson is nursing a knock and he is being monitored.Chesterfield have been dealt an injury blow with the news that winger Gary Roberts will be out for around six weeks with a hamstring injury.Roberts suffered the problem during the closing stages of the 3-1 league defeat against his former club Swindon last Saturday.It is thought the 30-year-old's absence will open the door for either Dan Gardner or Jay O'Shea to come back into the starting line-up.Emmanuel Dieseruvwe will drop out of the squad once more as the on-loan Sheffield Wednesday striker is ineligible for Paul Cook's men in the FA Cup