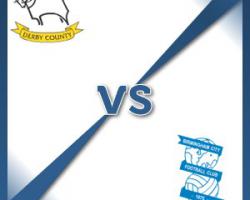 Derby V Birmingham - view commentary, squad, and statistics of the game live.Christie set for Rams comebackCyrus Christie could come back into the reckoning for Derby against Midlands rivals Birmingham.Christie has been struggling recently with a chest infection but the right-back has resumed training this week.Leading scorer Chris Martin, who has missed six matches with a hamstring problem, and midfielder George Thorne (thigh) could be fit for the trip to Norwich next weekend but Darren Bent (hamstring) and John Eustace remain about three weeks away from a return.In the absence of Martin and Bent, Johnny Russell is set to lead the attack on Saturday - as he did at Brighton on Tuesday night.Birmingham are likely to have an unchanged squad for the trip to the iPro Stadium after back-to-back wins

Michael Morrison, Gavin Gunning and Matt Green are all back in training after knee injuries but are likely to be a few weeks away from returning