Derby impressive as they win away at West Brom 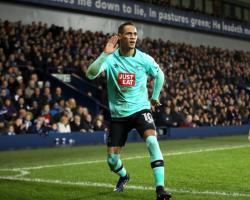 West Brom lost to Sky Bet Championship Reading last season and the Premier League side repeated the trick against Derby having failed to recover from going behind, with Craig Dawson coming closest to levelling after hitting the post

Scott Carson presented Salomon Rondon the ball on the edge of the box but was spared by a brilliant sliding challenge from Richard Keogh, who hooked Rondon's shot off the line

Despite the gaffe, Derby had begun the brighter but failed to threaten until the 23rd minute when Boaz Myhill, one of four Albion changes, turned Abdoul Camara's deflected cross wide

The Rams were more energetic than Albion but lacked the quality in the final third despite some snappy build up and, as they dictated the play, the game drifted towards half time

The visitors may have escaped the first time but paid the price when James McClean blocked Keogh's clearance.

Phillips still had plenty to do as the ball fell for him 25 yards out but advanced and drove a low effort past Carson from the edge of the box for his fifth goal in 11 games.

Albion went for the kill and nearly scored a quickfire second when James Morrison fired over and, after the break, Ga reth McAuley headed over and Rondon fired wide after robbing Jason Shackle

First Bent, who had been quiet, was granted too much time on the edge of the area to lash past Myhill from 20 yards after 50 minutes before Ince won it

The winger's run from his own half was halted by Morrison 25 yards out and, with the free kick slightly to the right, Albion expected a cross

Instead, Ince caught Myhill cold and aimed for the near post and the goalkeeper did not move as the 24-year-old curled in his ninth goal of the season

Albion's late pressure failed to pay off but Derby relied on an excellent reflex save from Carson in injury time as he turned Rondon's header over.