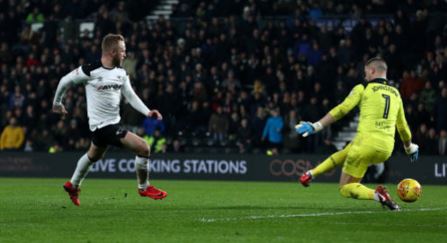 Weimann a former Villa players opened the scoring in the 24th minute. A poor ball from Villa let in Matej Vydra, his driving run and cross was headed in by Weimann.

Villa pressed in the second half but the Rams defended well and in stoppage time Richard Keogh set Johnny Russell free and he slide the ball under the Villa Keeper for a deserved Rams win.

The win now creates a four point cushion between the Rams and fifth place Villa who are on 37 points, with Sheffield United also on 37 points in 6th place.