Derby boss Steve McClaren refusing to get carried away 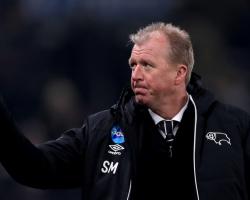 McClaren's team moved into the top six for the first time this season after securing a sixth consecutive victory in front of more than 32,000 fans.

It was certainly not Forest's day as key midfielder Henri Lansbury was injured in the pre-match warm-up before their bad luck continued when a Johnny Russell flick-on from a corner struck Nicklas Bendtner on the side of the head and looped inside the back post.

Matty Cash should have equalised but his shot from 15 yards lacked the power to beat Scott Carson and after Bendtner headed against his own bar in the 52nd minute, Derby took charge to seal victory.

Forest were opened up by Chris Baird's precise pass down the right channel in the 55th minute and Tom Ince slipped away from Eric Lichaj before turning inside Michael Mancienne to score from 12 yards.

Without Lansbury, Forest lacked the quality to trouble Derby and the game was over in the 64th minute when Will Hughes pounced on the rebound after Russell's shot had been well saved by Vladimir Stojkovic.

"It's a huge win for the supporters and will make their week and a huge three points for us that puts us up there, but I'm still not looking at the table," McClaren, formerly of Forest, said.

"There's a long way to go

Someone did say we are fifth and I told them to shut up! It's not where you are now but we are delighted to climb up the league and to do it in the manner that we are

"I thought we earned the right to play in the first half and sorted things out and in the second half we played football, we gave the wide players more licence to go one-on-one and that's how we got the two goals.

"I've just done what I normally do going into a club, try and see what they've got

I was very lucky that Chris Powell had taken the team and won one and drawn one and I could see they were starting to loosen up.

"I've just said this is the way we play and the way we work, just go out and do it and that's what the players have done

We've become solid and hard to beat but we've got footballers in the team as we saw in the second half."

He said: "The first half was correct but I don't understand the second half because we lost our shape and we played a poor second half, physically, technically and tactically.

We didn't deserve a victory because we played a poor second half.

We had no opportunity of scoring and it was easy to score a goal for Derby County because we did not have a good discipline."