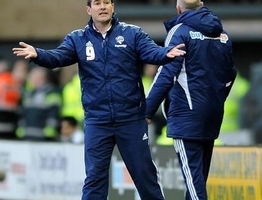 Goals from striker Cameron Jerome in the fifth minute and defender Robert Huth in the 81st eased last season's beaten finalists into the hat for the fifth round.

It was Jerome's opener that most annoyed Clough, the Rams manager claiming he was offside before prodding home his third goal in consecutive appearances - and fourth in five overall - to end Derby's run of four consecutive clean sheets. He said: "You just hope the Premier League officials would do a little better in that situation."

From such a start, the npower Championship club were always on the back foot, and against a resilient Stoke side mustered just one effort on target in the whole match. Even then that was more a cross from a free-kick that goalkeeper Asmir Begovic was forced to tip over the bar.

Asked if he had spoken to referee Mark Clattenburg to air his grievances, Clough added: "I've not, and we're not allowed to until 30 minutes after a game. We don't tend to do that anyway, so we'll just put it in our report.

"For us, it's obviously a crucial moment when you concede a goal after five minutes at home to Stoke, who are eighth in the Premier League, and it doesn't let you get a foothold in the game."

Stoke, though, fully merited their place in the last 16, and now all manager Tony Pulis is hoping for is a home draw for the next round after two on the road so far in the competition.

"It was always going to be a tough game as Derby have been on a great run of late," Pulis said. "We started well, scored the goal, but then I thought we were sloppy after that, and in the last 20 minutes of the first half Derby played really well and caused us problems.

"At half-time we dusted a few down and they went out a little more focused in the second half, and we were pleased with that in the respect that I don't think they had a shot.

"That was testament to the lads and the focus on what they had to do. For me now I just want the next tie to be at the Britannia, and we'll take whoever comes."