Bradley Johnson gets Derby a win at Wigan 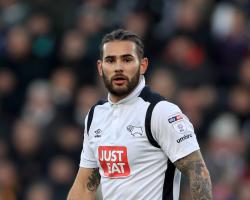 Wigan had started the brighter with Yanic Wildschut, outstanding in Monday night's win at Huddersfield, looking very dangerous in the lone striking role.

But it was the visitors who took the lead with their first attack on the 15-minute mark.

Thomas Ince floated in a lovely free-kick from the left-hand side and Johnson rose highest to nod home over the exposed Jussi Jaaskelainen.

Credit went to Wigan for the way they responded and Craig Morgan sent a header flying just over the bar from a corner.

Derby were almost gifted a second goal on 20 minutes when Luke Garbutt's poor backpass was seized upon by Johnny Russell.

The midfielder rounded Jaaskelainen but could only roll his shot against the near post from a tight angle.

Michael Jacobs, one of three Wigan men playing against his former club, sent a free-kick just over, before Max Power at least warmed the hands of Scott Carson from 20 yards.

Power was almost in again just before the break, but Wildschut either did not see him or elected not to play him in, before being crowded out.

Wigan picked up where they had left off at the start of the second half, with Derby having to scramble the ball away after a melee in their penalty area.

The home side sent on Will Grigg for the last half-hour, for Jordi Gomez, and the remainder of the game was virtually non-stop Wigan possession and pressure.

Garbutt almost fluked an equaliser when an over-hit cross very nearly embarrassed Carson on his return to the DW.

Wigan came even closer midway through the second period, when Stephen Warnock's cross was met powerfully by the head of Power, only for the ball to smack the crossbar and away to safety.

As the home side pushed more and more men forward - including substitutes Adam Le Fondre and Kaiyne Woolery, then were leaving themselves more and more open to the threat of a Derby counter.

But the visitors could not find a killer second goal, which always left the door open for Wigan - although they once again lacked a cutting edge.