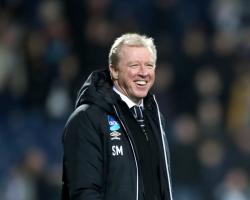 McClaren saw his side recover from conceding at home for the first time in nearly 13 hours to end a run of two defeats while Reading finished with 10 men when Jordan Obita was sent off in added time.

It had started so well for Reading, who became the first visiting team to score at Derby since September 24 when Liam Kelly's low cross from the right was turned in at the near post by John Swift in the 16th minute.

Jaap Stam's team were controlling the game but the first of several poor defensive decisions gave Derby the momentum after Richard Keogh's cross was bundled in by Darren Bent from six yards in the 36th minute.

A dreadful pass out from the back by Liam Moore in the 63rd minute allowed Will Hughes to intercept and Craig Bryson played Tom Ince in on the right to fire past Ali Al-Habsi from 10 yards.

Hughes scored the third 11 minutes later with a composed finish from 12 yards after Marcus Olsson's shot was blocked.

And, although substitute Yakou Meite headed in a corner in the 80th minute, Derby held on through six minutes of stoppage time in which Obita was shown a second yellow card.

McClaren admitted his team had been second best at the start, which prompted him to come down from the stands and roam his technical area.

"I couldn't stand watching that upstairs," he said

"We were allowing them to play, there was no intensity and apart from running on the field, the only way I could do anything about it was to run up and down the line like a crazy man.

They decided to join in the fight and we made it a bit feisty and lit a fire which we had to do.

"We always talk about lighting a fire and we needed something to do that, a tackle, a melee, or a goal and it got pretty feisty but we felt we needed to get the intensity up on and off the field and we did that.

"It was a big win, there was a lot of pressure on the team to deliver and find a way to win and the response was great from going a goal down."

He said: "I think we should have got something out of this game

If you look at the way we performed, we should have had at least a point

"If you concede two easy goals, you make it difficult for yourself, the second goal you are taking a lot of risk in building up from the back.

"I think overall how we played, pressing the opposition, we played very well as a team and the mentality was very good even after the third goal.

"We spoke about this after the game, you need to learn from certain things in what you need to do and what the game is asking at certain times

But I'm happy with the team and how they performed and I think they deserved more."