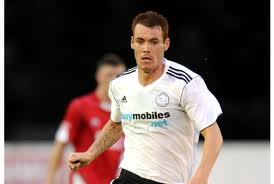 Naylor has put pen-to-paper on a contract which will run until the summer of 2015 after the Rams agreed an undisclosed fee with the Stags for his services.

The centre-back is yet to make his Rams bow but he has impressed manager Nigel Clough in training and also when turning out for Derby's reserves.

Prior to arriving at Pride Park in November, Naylor had attracted interest from a number of Championship and Premier League clubs.

He is a graduate of Mansfield's youth system and made his first-team debut for the Stags against Altrincham in April 2009.

He spent the 2009/10 season on loan at Belper Town, where he received rave reviews, and after a short stint on loan at Alfreton Town he returned to appear 17 times for the Stags last season in the Blue Square Bet Premier as well as being part of the Mansfield side that reached the FA Trophy Final...