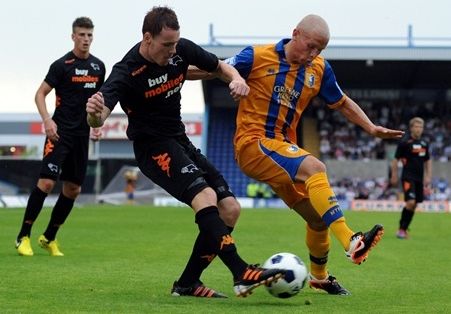 The Rams hit the road again in their traditional round of local pre-season friendlies and came out second best to Mansfield Town, losing 2-1. To the Blue Square Premier league side.

For Mansfield this was their fifth pre-season game and the well drilled Stags took full advantage of being at home and fielding a settled side. Despite going a goal down to a penalty, scored by Theo Robinson, the Stags fought back but went in at half time still trailing to the strike.

Derby fielded their three new signings during the evening Richard Keogh, Paul Coutts and Michael Jacobs, and also had a look at 18 year-old centre back Valentin Gjokaj from Switzerland.

The Rams were without first choice goalkeeper Frank Fielding, who has a slight knee problem and his deputy Adam Legzdins also sat out the game because of a dead leg. The good news was the return of Rams number three keeper and long term absentee Saul Deeney. Deeney who has returned from a shoulder injury and took his place in the Rams line-up.

Striker Steve Davies was not played last night, fuelling the rumours that he will join Ipswich Town later next week.

The Rams now move on to Burton Albion on Saturday afternoon for their second warm-up game before the start of the 2012-13 Championship season.