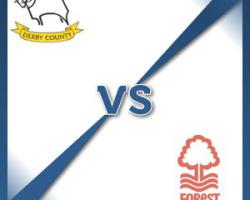 Derby V Nottm Forest - view commentary, squad, and statistics of the game live.Eustace out for RamsJohn Eustace's absence leaves Derby head coach Steve McClaren pondering his midfield options ahead of the the visit of east midlands rivals Nottingham Forest.Eustace was due to serve a one-match suspension on Saturday but will now be out for several weeks after it emerged he requires a knee operation

Omar Mascarell is most likely to replace the 35-year-old but Craig Bryson, who scored a hat-trick in this fixture in March as Derby romped to a 5-0 win, is also pushing for a recall.Jeff Hendrick is expected to be fine, despite suffering a nasty cut to the head in last weekend's 1-0 victory at Ipswich.New signing Stephen Warnock is nursing an ankle injury and will not be involved while teenager Isak Ssewankambo, who also joined the Rams this week, is not expected to feature.Forest manager Stuart Pearce is hopeful that top scorer Britt Assombalonga will be fit.The 13-goal striker hobbled out of the home defeat to Sheffield Wednesday with a hip injury

The problem has kept him out of training this week but Pearce has his fingers crossed Assombolonga can prove his fitness on Friday.Midfielder Henri Lansbury is available again after a two-match ban while centre-half Kelvin Wilson has been training after missing out last weekend through illness.However, Michael Mancienne and Matty Fryatt are still sidelined and Andy Reid, who is nearing a long-awaited return after a groin injury, will just miss out on the trip to the iPro Stadium