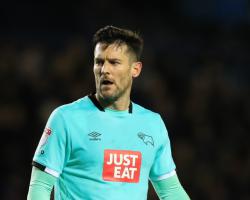 Nugent picked up the knock during the defeat at Leeds on January 13, making his Rams debut following his move from Middlesbrough, and the problem saw him sit out Saturday's home win over Reading.

He will be hoping to face the club where he spent four years as a player between 2011 and 2015 when the Premier League champions arrive at the iPro Stadium for Friday night's televised fourth-round tie.

But Derby boss Steve McClaren will not take any risks with the 31-year-old, with two important Championship fixtures looming next week

"Darren Bent is on form for us at the moment, so we'll probably have to rely on him again as the focal point

If we can involve him at all against his former club, we would love to do that, but we won't take any risks, especially with a big game at Ipswich coming up on Tuesday and then Newcastle the following weekend

"We have three games in nine days and we have six league matches in February."

Meanwhile, McClaren revealed St Mirren winger Kyle McAllister was undergoing a medical on Wednesday afternoon ahead of a move to Derby

Press Association Sport understands the Rams have had a bid of ÃÂ£225,000 accepted by the Scottish Championship strugglers

"As long it goes okay, we hope to sign him," McClaren said

" He is an 18-year-old young talent who we identified

He is one for the future."

This season, he has played 14 games for the Buddies, who are currently bottom of the Scottish Championship, scoring one goal.